A Bear of Very Little Brain

Commuters reading the London Evening News on Christmas Eve 1925 would have seen a new children’s story called ‘The Wrong Sort of Bees’, featuring the first appearance of a honey-loving bear. What the readers wouldn’t have known is that this wasn’t the last they would hear of this particular bear. Ten months later, on 14 October 1924, Winnie-the-Pooh was published and everyone’s favourite bear appeared between hard covers for the first time.

Pooh’s creator, AA (Alan Alexander) Milne (1882-1956) grew up in Kilburn, where his father ran Henley House school. The school boasted HG Wells as one of its teachers and for a time Wells did teach the young Milne. He then went onto Westminster School and Trinity College, Cambridge where he made the right contacts and was able to get a job working on Punch. As well as writing comic essays and sketches he found success as a a novelist and as a playwright (The Dover Road was recently revived at Jermyn Street Theatre) but it was as a writer for children that he found lasting fame.

In 1921 Milne bought a teddy bear at Harrods for his baby son Christopher Robin which was soon named after Winnipeg, a Canadian bear in London Zoo. Winnipeg was a female bear which presumably accounts for the nickname Winnie. Young Christopher’s toys also included a donkey, a kangaroo and a piglet and later a tiger (but no owl). These toys, along with Christopher Robin himself found themselves appearing in Milne’s stories. The initial 1925 publication in the London Evening News was followed in 1926 by Winnie-the-Pooh, with The House at Pooh Corner following in 1928.

The books were instant successes. Christopher Milne found himself a rather unwilling celebrity and the subject of much teasing at school. Eventually he left London and spent many happy years running a bookshop in Dartmouth, Devon.

Incidentally, you can see Winnie, Piglet, Kanga and friends on display in the New York Public Library, where they are kept in captivity and much appreciate visitors from home… [see post script below]

For many of us, our enjoyment of the stories owes as much to the charming pictures as to the text. And these were drawn by another Londoner – EH (Ernest Howard) Shepard (1879-1976), who spent much of his life in St John’s Wood. He was born at 55 Springfield Road and in the 1930s lived in a splendid house in Melina Place with his son Graeme, whose own bear Growler was the model for Shepard’s drawings of Pooh. Shepard, of course, also drew the most famous set of illustrations for The Wind in the Willows (which AA Milne dramatised as Toad of Toad Hall) and he wrote a charming memoir of his St John’s Wood childhood called Drawn from Memory. This includes his memories of Queen Victoria’s Golden Jubilee and the famous 1887 fire that completely destroyed Whiteley’s department store (then in Westbourne Grove) which could be seen from Highgate Hill. You can see a plaque to EH Shepard at another of his Westminster homes – 10 Kent Terrace, Regents Park. 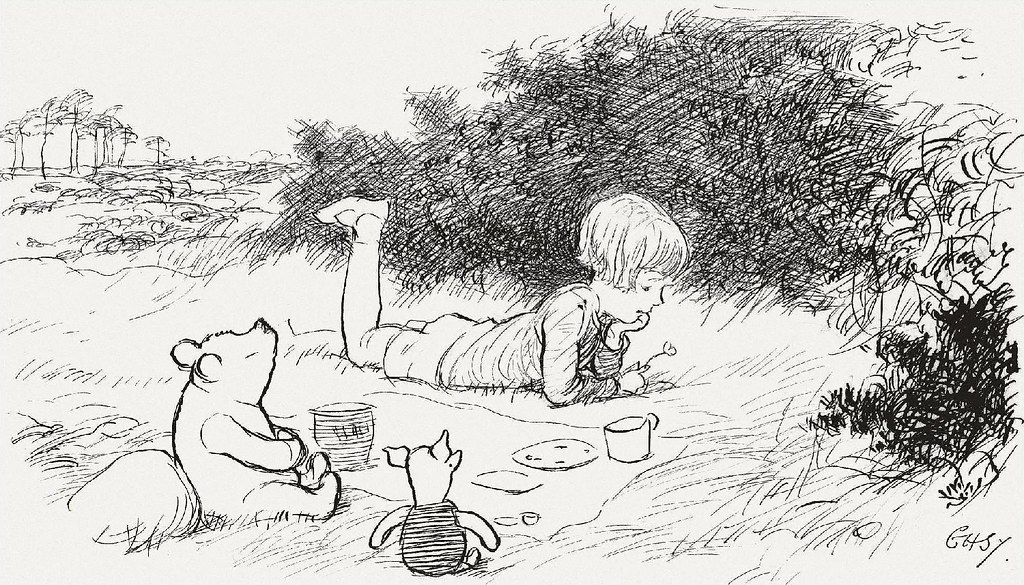 You can find out more about AA and Christopher Robin Milne and EH Shepard in the Oxford Dictionary of National Biography (log in with your library card number). You may also wish to look at the splendid bound volumes of Punch held by Westminster Reference Library.

And of course, you’ll find plenty of Disney DVDs in our children’s libraries though you’ll have to try to ignore the American accents and the incongruous Gopher – we all know the real Pooh was a true Londoner!

Post script: Catherine Cooke of the Sherlock Holmes Collection has paid several visits to Pooh and friends in their New York home, and sent these great pictures to share:

This week in The Big Friendly Read

The heatwave seems to have left us (for the time being at least) – but don’t worry, even if the weather is rubbish we have lots to entertain younger customers in our libraries!

They can join in the Summer Reading Challenge, the theme of which is Roald Dahl this year. Check out the official website – it’s got suggestions for what to read next, games to play and competitions.

As well as the Challenge, we have organised a (writing) shed full of events in libraries, all free! Why not check out what’s on at your local library over the holiday?

Here is a taste of what’s been going on this week:

Children at four Westminster libraries have been partying in Wonderland, thanks to volunteer Maureen Pepper and Made in Libraries. In this blog post, Maureen tells us how it all came about.

“I have been a volunteer at Queens Park Library for a long time. Last year I was talking to a group of children at the library and was surprised to discover that none of them had read Alice in Wonderland. One had tried but had found the original text too hard. I thought if the book could be introduced to children via games, riddles and puzzles it would be very appealing and many would read it. I devised the first performance for Queens Park Library in November 2015 and worked with Bebie Waller of Actingworks and some of her staff to perform it.”

“Once we had done the show in Queens Park Library, it seemed a shame to pack away all the props etc and I heard about the possibility of support from Made In Libraries and the Westminster Wards budget for a further three performances at St John’s Wood, Church Street and Pimlico libraries. The performances (or perhaps the word workshop would be more appropriate) took place in May 2016.”

“I was particularly delighted with the reaction from some of the very young boys who took part at all three libraries. They were enchanted and engaged in a way that the Disney film could not touch. I was thrilled that children at St John’s Wood Library and Pimlico Library left clutching a copy of the book which they had borrowed with their own library card. Three mothers at Church Street were so delighted with the event that they insisted on helping us to wash the china cups and saucers afterwards! At St John’s wood, elderly members of the public were watching the tea party with delight through the window from the pavement and one came into the library to say how thrilled she was to see young children being introduced to a book that she had loved as a child.”

“All the performances attracted a diverse range of children – EAL speakers from Iraq, Pakistan, Somalia, China, Malaysia and Japan, children with special needs, boys and girls. Everyone got involved in every activity, and the parents seemed to enjoy the performance as much as the children!”

Save the date –
Saturday 7 May is
Free Comic Book Day

Across North America and around the world, comic shops will be giving away free comics. And Westminster Libraries are taking part, courtesy of the lovely folks at Forbidden Planet who are providing the comics.

You can collect yours from your local library (see list of participating libraries below). One title per customer, while stocks last – which won’t be long!

There is a Doctor Who title, a Superhero Girls title and selected libraries will also have Suicide Squad (suitable for teens and over only).

Why not check out the graphic novel collection while you are there and see what else your library has to offer?

St John’s Wood round up

There’s just been so much going on in St John’s Wood Library recently! And there’s much more to come.

Here’s a round up of a few highlights from recent weeks:

For Interfaith Week 2015, we hosted Sh. Kazi Luthfur Rahman, Imam at the London Central Mosque and Islamic Cultural Centre, who gave a talk about the Quran. While discussing links to the previous revelations – Torah, Psalms and Gospels – the Imam also discussed some of the important teachings, as well as the history and origins of the Quran. There was an involved discussion, with the general consensus being that the library should organise more events regarding different religions and cultures.

Then, as part of a ‘tour’ of libraries, we welcomed Toni Stuart and her poetry installation Here to Listen. Toni describes herself as “a poet, performer, spoken word educator, festival curator from Cape Town, South Africa, currently in London, UK”. She stayed with St John’s Wood Library for two full days in early December, before moving on to do the same at Victoria Library and Westminster Reference Library later in the month. In silence, she listened to those who sat with her and told her their stories and what was on their mind. She then wrote poems about it. She describes her approach on her blog: Here to Listen, and you can read the poems written at St John’s Wood Library.

December was also the month for Hanukkah and Christmas celebrations, including arts and craft and face painting hosted by Imagethirst, who have been coming to St John’s Wood Library for several years, offering to do portrait photos of children for free. They sometimes host the whole party, sometimes they bring frames to decorate. This time they did some fabulous face paiting. Children (and parents, carers, this librarian and our volunteer Vivienne Levan) also made hanukkiot (hanukkia is the eight candled menora).

The Christmas parties were also a joy, with happy children receiving books as gifts, enjoying healthy snacks and having lots of fun, thanks to staff and volunteers alike.

The Monthly Meet Up continued with a visit from the Timeline Brass Ensemble performing some classic sounds of the season. This young and enthusiastic band made some heads turn on the street (yes, they were powerful!) so people came in from outside to enjoy the music. Others peeked through the windows and waved. It was a burst of lovely music that shook us up in a good way.

A lovely bit of continuity through the generations has led to our regular Storytime on Tuesday afternoons. For about 30 minutes – or as we prefer to measure it, several stories – Gavin Asher reads and acts for children.

It is a treat and he is gaining a following. An avid reader, Gavin has been a very regular library member for a long time. His son Gino is now a teenager, but he basically grew up in the library. Gavin loved reading to Gino so much that he missed doing it and decided to share his joy of reading with other children and adults.
Join us next Tuesday!

And there’s much more to come – visit our Events page for details. We hope to see you at Tim Judah’s talk about Ukraine this evening!